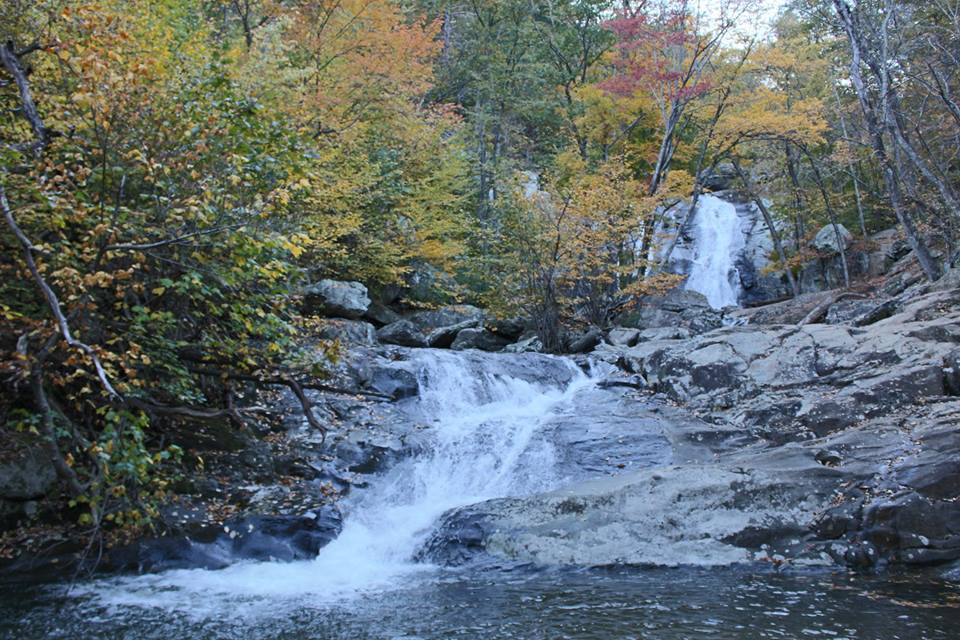 “Spectacular” is a common word used in describing the Shenandoah Valley. But within this naturally scenic region, what areas really stand out for being uncommon, unique—for being truly spectacular? Of course the question invites spirited debate—but we consider the following sites to at least be candidates for the list. If you haven’t seen them, we hope you can visit soon, and let us know if we’re wrong.

Natural Bridge
Once revered by the Monacan Indians, surveyed by George Washington, and owned by Thomas Jefferson, the awe-inspiring Natural Bridge has 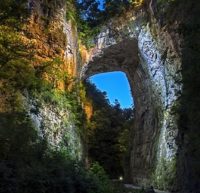 been riveting tourists since the 18th Century. The bridge is 215 feet high and spans 90 feet across Cedar Creek, which carved the formation from adjacent limestone. Start your trip at the Visitor Center and take the long series of steps down to the path along the creek and onto the Natural Bridge. There is also a shuttle to the trailhead if you prefer not to walk.

Natural Bridge State Park is more than just the bridge; grand views of surrounding mountains and the James River Valley are rewarding and accessible over six miles of hiking trails, including the Cedar Creek Trail that leads to the 30- foot beauty of Lace Falls.

Blackrock Summit
In Shenandoah National Park, Blackrock Summit is an easy one- mile hike leading to an immense boulder field with views of the mountains and valley beyond. The views are widely regarded as among the best in the Park. Explore the huge expanse of monolithic boulders (but watch your footing). In the mid-1800s, it was common for guests at the old Blackrock Springs Hotel to hike here and carve their names into the rocks. From the Blackrock parking area (MP 84.4) on Skyline Drive, follow the Appalachian Trail south. At the trail post, turn right and continue to the boulder field where you can see the layers and quartzite patterns on the rocks and a beautiful view.

Dream Lake at Luray Caverns
In a geologic wonder like Luray Caverns, is it even worth trying to highlight one part as “spectacular?” Take a look at Dream Lake and decide for

yourself. Barely 20 inches deep, this large, serene pool perfectly reflects the spires and stalactites hanging from the ceiling. It is truly a unique visual experience. Go now and see the Cavern’s brand new entrance.

the Shenandoah Valley. Carved centuries ago by receding oceans, the seven limestone Natural Chimneys rise as much as 120 feet above the Valley floor. Now open to both day visitors and overnighters in the Natural Chimneys Park campground, located in Mt. Solon. The park includes a 145- site campground with water and electrical hook-ups. The campground also has a separate section for primitive/tent campers with rather large, spacious sites. Camping is available in season, on a ‘first come, first serve” basis.

White Oak Canyon/Falls: One of the most popular hikes in Shenandoah National Park, with good reason–a series of six waterfalls, with the largest a powerful 86 feet. Some of the pools are deep enough for swimming. At least three different routes, described here will get you there. In fall, the photo ops here rival anything you will find in the Shenandoah Valley. There is actually another waterfall in the Park—Overall Run—that is longer, at 93 feet, but at dry times of the year water levels can be quite low there. More waterfall hikes in the Park may be found here.

Mary’s Rock Tunnel
It takes only moments to drive through Mary’s Rock tunnel, on Skyline Drive just south of the Thornton Gap entrance, but what is spectacular is the effort it took to build it. Completed in 1932, the tunnel required three months of drilling, blasting, and clearing through solid granite. Twice a day, CCC workers drilled 40, 12-foot holes into the rock, then filled the holes with 500 pounds of dynamite. Then, “KA-BOOM.” Water seeped constantly through the rock, making all the work that much harder. (Towering icicles in winter still hang in and around the tunnel.) Three, eight- hour shifts of 15 men were on hand to clear the rubble.

Quite near the tunnel is the very popular, “moderate” hike up to Mary’s Rock. Park at the old Panorama parking area at mile 31.6 of Skyline Drive, just south of the Thornton Gap Entrance. At the end of the parking area take the short connector trail to the Appalachian Trail and go left (south). At the next trailpost take a right to follow the trail to Mary’s Rock summit. (Unconfirmed stories abound about who Mary was. One holds that Francis Thornton’s daughter, Mary, climbed up the peak one day and returned home with two bear cubs.)

Jefferson Rock at Harpers Ferry—Thomas Jefferson expressed the beauty of this view as follows: “The passage of the Patowmac through the Blue

Ridge is perhaps one of the most stupendous scenes in Nature. You stand on a very high point of land. On your right comes up the Shenandoah, having ranged along the foot of the mountain a hundred miles to seek a vent. On your left approaches the Patowmac in quest of a passage also. In the moment of their junction they rush together against the mountain, rend it asunder and pass off to the sea.”

Harpers Ferry National Historical Park celebrated its 75th anniversary in June this year. Combine the views, the history, the rivers and a growing dining/entertainment vibe in town and a weekend trip seems hard to pass up.

“Watch the sunset in neighboring West Virginia,” Black continued. “The view from the rock outcropping is incredible—a 260-degree panorama. If you decide to make a weekend out of it, the Wolf Gap recreation area has nine campsites with bathroom facilities. If you have some extra time consider hiking the Tibbet Knob route as well. It presents a couple of rock scrambles but sees far fewer visitors. The views are every bit as good. In the evening the stars come out and the entire Milky Way is visible on a clear night. Wake up to a spectacular sunrise and soak in the view.”

The name of the summit is German for “Big Castle,” reflecting both the German heritage of the region and the towering rock outcrops at the end of the trail. Hiking trails abound in Shenandoah County. Click here for more information on Big Schloss and others.

Technically not within the Shenandoah Valley, but quite nearby and meriting their own place on any “spectacular” list:

McAfee Knob is often described as the “most photographed spot on the Appalachian Trail.” Tiptoe out on its iconic rock ledge, suspended 3,197 feet up, and you’ll see why. The view is 270 degrees of wonder, and the trail is just under nine miles, up and back. About 45 miles southwest of Natural Bridge.

Seneca Rocks—An imposing formation rising 900 feet, Seneca Rocks is one of West Virginia’s most-loved attractions, at least with outdoorsmen and rock climbers. People have inched up its face since Native American’s camped nearby. It’s about 65 miles northwest of Harrisonburg.

Dolly Sods Wilderness— Named for an 18th-century German immigrant family — the Dahles — and a local term for an open mountaintop meadow — a “sods.” The Dolly Sods Wilderness (DSW) is about 17,371 acres, and is part of a larger 32,000-acre area now known as “Dolly Sods” and managed by the U.S. Forest Service. Features include 47 miles of hiking trails, rocky, high altitude plateaus with stunning views, and flora and fauna normally found in Canada. It’s about 90 mountainous miles west of Middletown, VA.