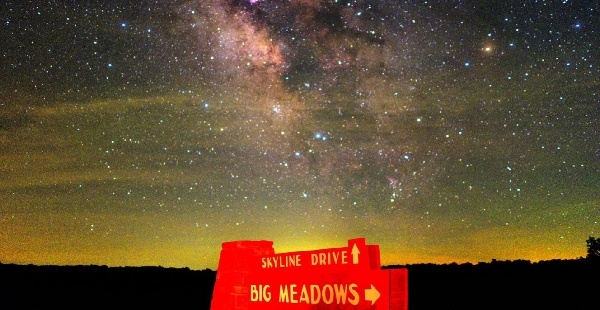 There is a saying within the National Park Service about Shenandoah National Park: “Half the park is after dark.”

Anyone who has camped out in the park and looked up at night—and been astounded by how brilliant that stars look away from urban light pollution—understands the impact of that saying. Some say that four times as many stars are visible above the Park as over East Coast urban  areas.

And you don’t even need to camp anymore to experience it. Several different Astronomy Events allow you to take in the glorious night skies from Shenandoah National Park. These include:

• Twilight Hiking–Guided hikes starting at 7:00 p.m. Reservations required; $20 per person. Some dates are already sold out so book now.

We chatted with “Let’s Talk about Space” leader Greg Redfern, who has been an adjunct professor/instructor of astronomy for five different colleges since 1984. A NASA/JPL Solar System Ambassador since 2003, he has shared NASA’s missions with audiences in person as well as on television and radio outlets in the Washington D.C. area. Greg’s daily astronomy blog  has had over 2 million visits from around the world. As a writer Greg has authored feature articles for a number of magazines and newspapers.

SVTA: How did your involvement with Shenandoah National Park come about?
Redfern: “Six years ago I went to the Park Service at Shenandoah National Park and said, ‘You could really do a nighttime part of the whole Shenandoah National Park story. Give a presentation. If the sky is clear, do a visual orientation. Learn about NASA, the sky, astronomy and meteorites.’ Not to divert, but most people don’t know about the Chesapeake Bay Impact Crater. It’s the largest crater in the United States. It’s 63 miles across, and is under the bay, created by an asteroid or a comet 35.4 million years ago.”

SVTA: Are Big Meadows and Skyland conducive to seeing any particular astronomical sight?
Redfern: “Absolutely– the summer Milky Way. It is the penultimate view. People are spellbound. They leave in tears. And the best time to see it is summer, especially August, when the brightest portion is very high overhead. You may not realize that 80 -90 percent of people in North America cannot see the Milky Way due to light pollution. We have a wonderful dark sky oasis in Shenandoah National Park.”

SVTA: If someone only has one day (or night) to come for astronomy, what’s the best time?
Redfern: “August 9 to 11 is the Fourth annual Night Sky Festival.  The entire park will be dedicated to astronomy that day–rangers, astronauts, me—we see over 1,000 visitors at this each year. There will be activities for families, kids—everyone.” Space weather, space travel, our future in space and many other topics may be explored. All events are free with park admission.